Happy New Year everyone and welcome to the first 2017 edition of Chop Talk!. What a year we’ve had in 2016 and we are looking forward to an even better 2017. This past year held some great adventures for us here at Ergo Chef, from the Costco Road Show with Chef Randy, to the awesome events in Chicago, Memphis, Cleveland, New Hyde Park with the CIA and more. We also had new product launches throughout the year as well with our newly redesigned and upgraded My Juicer and our new Shinzui Chef Knife. We are excited to announce the opening our new showroom in Danbury, CT, as well as our sponsorship of a local Connecticut TV Show,  Edible Nutmeg On The Road, hosted by our good friend Chef Plum. Whew!!!! No wonder we’re exhausted, lol. Here’s a quick recap, as well as a new recipe for you highlighting the Michael Symon Vegetable Clever. Last but not least, to celebrate the New Year, a special “coupon code” sale.

First up started the year off at the IHH Show in Chicago where we introduced Michael Symon’s new 6pc. Knife set with Magnet Strip, The Myron Mixon Pitmaster’s Grill Tool, Presidential Chef’s Choice 4” Ceramic Paring Knife and our new Pro Series 2.3″ wide 8″ Chef Knife with no hollow grounds. This year’s IHH will be no different as we introduce some exciting new products, so stay tuned for more details.

We traveled to Memphis in May with Myron Mixon’s BBQ Team and the Grill Tool, where Myron won Grand Champion of the Competition!!! Though Myron brought those awesome Pitmaster skills, we’re pretty sure the Grill Tool is what put him over the top this year! The Grill Tool has been huge hit with it’s awesome 3-in-1 design. Pop it, Flip it & Slice it! The Myron Mixon Pitmaster Grill Tool is first tool to deliver a style and functionality that says “Game On”! The 3-in-1 design was specifically developed & tested for easily flipping all your proteins & large veggies on the grill with the patented flipper hook.

Each year The Culinary Institute of America holds it’s annual Run For Your Knives scholarship fund raising event, and Ergo Chef is proud to be a sponsor. This years event, while rainy, was a huge success and we were privileged to provide culinary knife kits to all the student winners.

We were very excited to introduce our new Japanese Damascus VG10 Knife SHINZUI in late October, which turned out to be a tremendous success with many chefs loving the razor edge & wicked performance of this knife. This 8 inch Chef (Gyuto) knife is appropriately named “SHINZUI™” to encompass it’s total composition. It’s the Japanese meaning for core, strength and essence.  From the blade it highlights the super strong and durable VG10 “core” having super “strength” and to the look and “essence” in the form and functional design of this 8” Japanese chef knife to give you ultimate performance in your kitchen!

Recipe : Cassoulet, a hearty stew to keep you warm 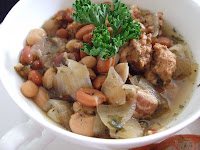 1-15 oz can white kidney beans
1-15 oz can pinto beans
1 large Spanish onion, diced
10 garlic cloves, minced
3/4 lb ground pork
1/4 lb shredded duck confit
1 T dried parsley
2 T dried thyme leaf
1 T rosemary
1 bay leaf
1 t rubbed sage
1/4 to 1/2 c sherry (dry)
2-3 qts water (enough to cover all ingredients )
salt and pepper
fresh parsley
Method
In a slow cooker, or large heavy bottomed pot, spread the bacon cubes, evenly over the bottom of the pan. This will be the first layer. Drain and rinse the beans. Mix beans, onion and garlic together and spread over the bacon creating the second layer. Crumble the ground pork and duck over the beans. This is the third layer. Mix all the herbs together (except the bay leaf) and sprinkle over the meat. Add water and sherry making sure all the ingredients are covered. This is important, so to ensure proper cooking. Add the bay leaf. Set temperature on very low and cook 6-8 hours or overnight if possible. If you are using a traditional pot, bring to a boil and then lower temperature and simmer on very low for 6-8 hours. After cooking is complete, gently stir in chopped parsley. Salt and pepper to taste.

The Michael Symon Vegetable Clever is the perfect too for chopping all your veggies for this dish.

We thank you for being a loyal Ergo Chef Customer and friend and to that end we are offering a Happy 2017 site-wide sale throughout the month of January! All month long we will offer up an Extra 12-20% off randomly – so shop often! Use the Coupon Code: HAPPY2017  when you check out!

Thanks again and All the best for this coming year!

The Do’s and Dont’s of Knife Handling

We never get sick of talking about knives... and other stuff. Brought to you by @ergoknifeguy Mike Staib and his bro Scott.